Katie Holmes’ personal stylist Brie Welch defended the actress’ recent viral Y2K look, after she was mocked for hitting a red carpet in a long tunic over baggy jeans.

In an interview with The New York Times, Welch explained her look for the Jingle Ball on Friday, sharing it was a collaboration of her styling and the Batman star’s, 43, own taste.

‘We decided the rich color and subtle bustier effect detailing of the top was elegant and would be fun if paired with jeans, creating a more youthful feel for Jingle Ball and the atmosphere there,’ she told the publication. 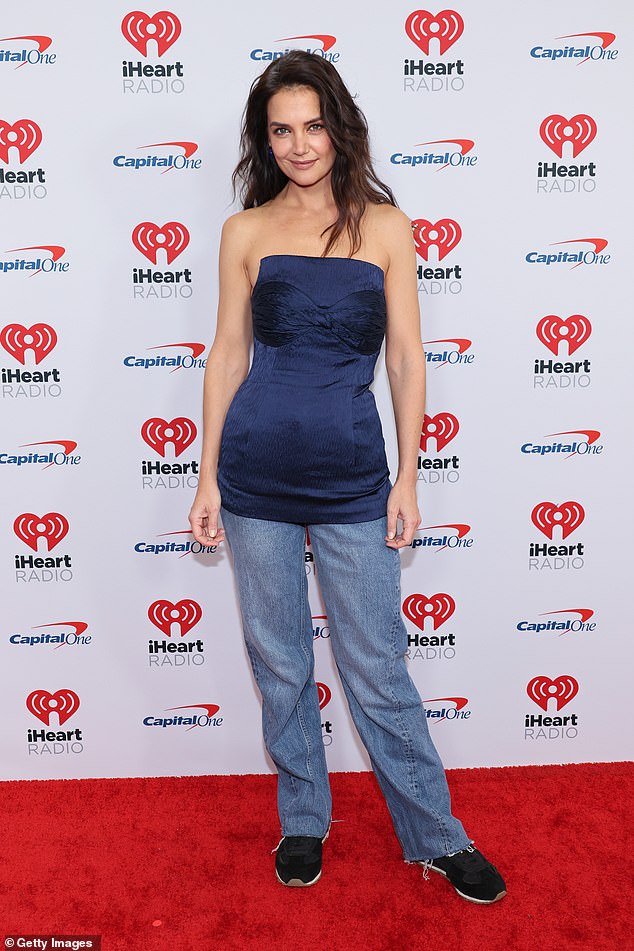 Happy with it: Katie Holmes’ personal stylist Brie Welch defended the actress’ recent viral Y2K look, after she was mocked for hitting a red carpet in a long tunic over baggy jeans on Friday

Welch also revealed that it was Katie’s idea to pair the outfit with sneakers, as she wanted to be comfortable enough to dance.

‘On the day of (and because Katie has her own effortless style that should be appreciated here), she said she wanted to wear sneakers, because it was a concert and obviously there would be a lot of dancing to Dua Lipa (and nothing is more comfortable!).’ she added.

Welch went on to note that the star is ‘more than capable of looking cool in an unintentional trend 20 years later.’ 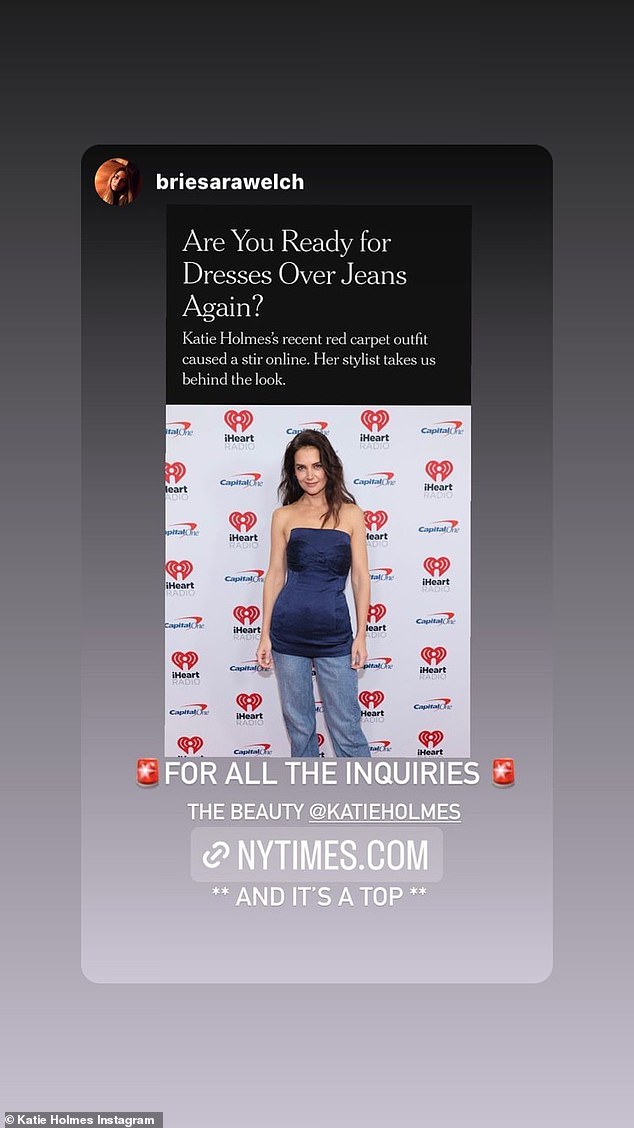 Clarifying: Holmes, 43, reposted an interview with Welch where she explained the look, sharing it was a collaboration of her styling and the Batman star’s own taste

Welch also took to her Instagram to repost the article while also clarifying that the navy top was not a dress, as the article had stated.

Holmes reposted the Story to her own Instagram as well.

The star has been the center of attention the past few days after she sported an outfit that represented Y2K fashion to a T and has social media users ‘sick’ from the flashbacks to the 2000s. 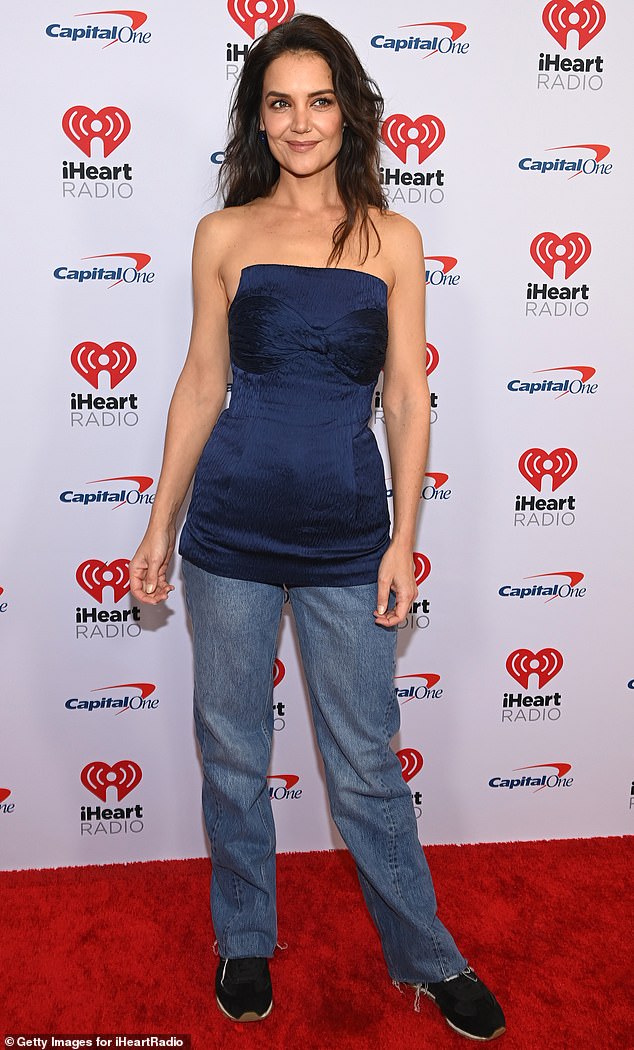 ‘More youthful’: Welch explained that they wanted to create ‘a more youthful feel for Jingle Ball’ and that Katie chose to wear sneakers so that she could dance

On Friday, the actress attended Jingle Ball and donned a form-fitting blue mini blue dress over frayed jeans and a pair of black sneakers – which sent the internet into a frenzy as they couldn’t believe the Dawson’s Creek star stepped out looking like she just came off of a ‘mid-2000s Disney red carpet.’

And although Y2K style has been making a comeback in recent users, social media users proved they weren’t ready for a return this drastic as they hilariously mocked the actress for her outfit choice.

One user claimed the ‘ugly’ trend had already past and begged Katie to leave it in the past – where they said it belongs. 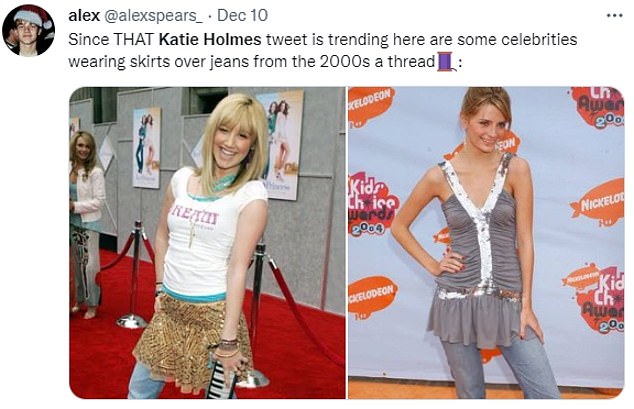 Many users even compared her to other celebrities who sported the fashion style in the early 2000s such as Ashley Tisdale, Britney Spears and more 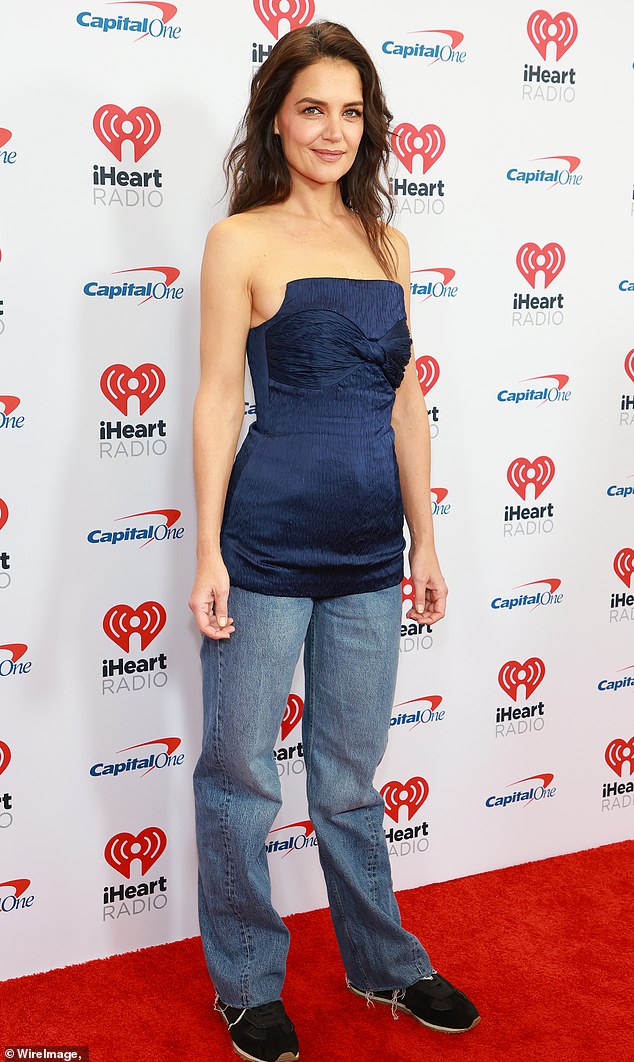 The star donned a blue mini-dress on top of flare jeans, paired with black sneakers and was mocked on social media for her ensemble

‘This trend reared its ugly head years ago and honestly how dare Katie Holmes have the audacity to try to bring it back.’

Other users claimed they were ‘disturbed’ by the Dawson’s Creek star’s 2000s ensemble and added that she ‘looked like a mess.’

One user even questioned why she chose to sport the unique outfit, despite having the ‘money and a stylist’ before adding that it wasn’t ‘2003.’

And while most users tore the actress apart, some noted that the trend actually represented the Y2K style that so many had begged for.

Y2K style or, year 2000 style, is a trend that sees people recreating the fashion styles from the late 90s to the early 2000s.

Users begged the actress to leave the ‘ugly’ trend in the past, while others said they were ‘disturbed’ and even thought the photo was from the 2000s

In the past, celebrities like Hilary Duff, Destiny’s Child, Britney Spears, Paris Hilton, Anne Hathaway and many others all shaped the 2000s with their looks that saw them pairing dresses over jeans – and now Katie is determined to bring it back, despite social media users’ pleas to keep it locked in the past.

The style has been all the craze in recent years, so its no wonder the actress tried to pull off the unique ensemble on the red carpet, and while she may have thought her outfit was lowkey, the response sure wasn’t.

‘I actually don’t have a witty tweet for this, I’m just very disturbed. Like this can’t be the Katie Holmes who was serving in a knit Khaite sweater and bralette just two summers ago,’ wrote one user.

Another user commented: ‘Katie Holmes singlehandedly trying to bring back the mid2000s Disney red carpet aesthetic, and good on her. Good on her.’

Hilariously, some users thought the photo was a picture of the actress that had resurfaced from the late 90s or early 2000s – which just goes to show how the star hasn’t aged since her role in beloved TV show Dawson’s Creek. 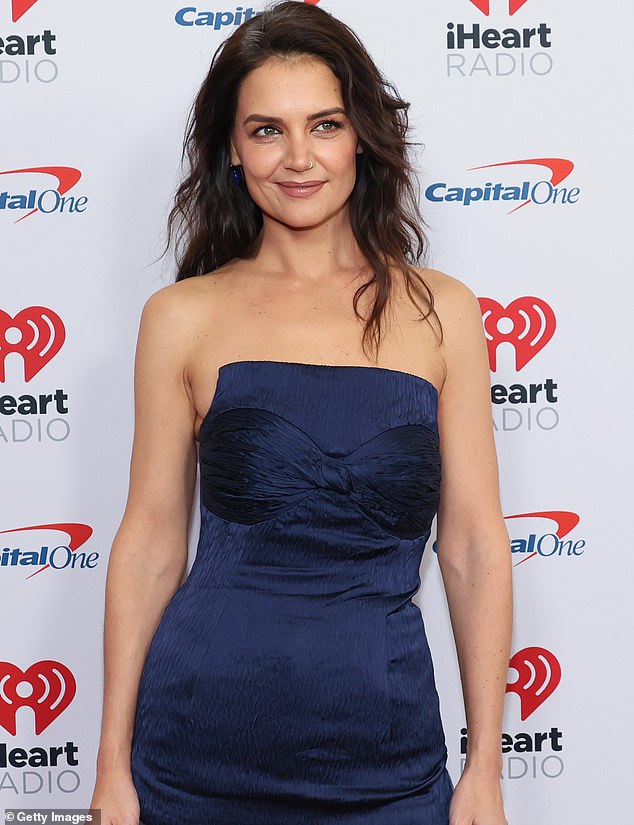 Katie wore the look that featured a bustier dress with a bow to celebrate the holiday season, while letting her brunette locks effortlessly flow to her side 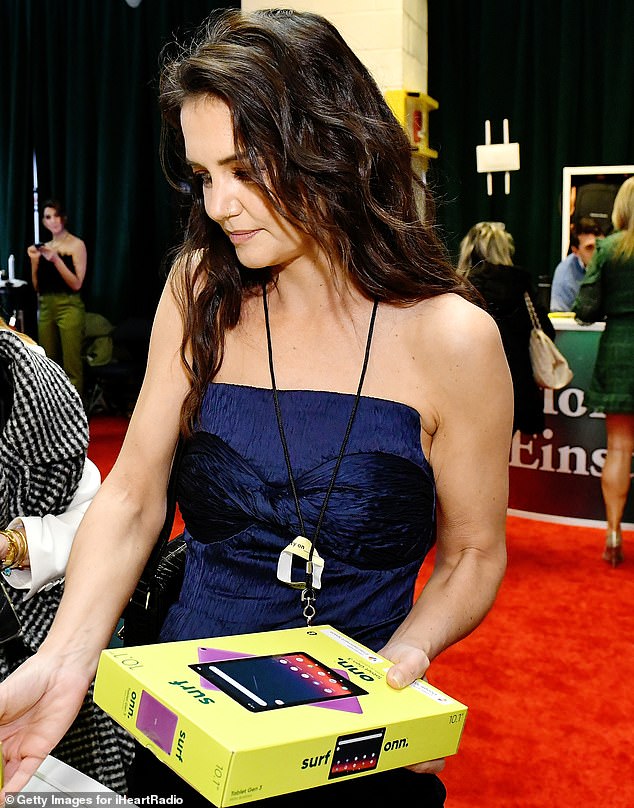 Once inside the venue, Katie was spotted stopping by a few vendors to pick up a few special items 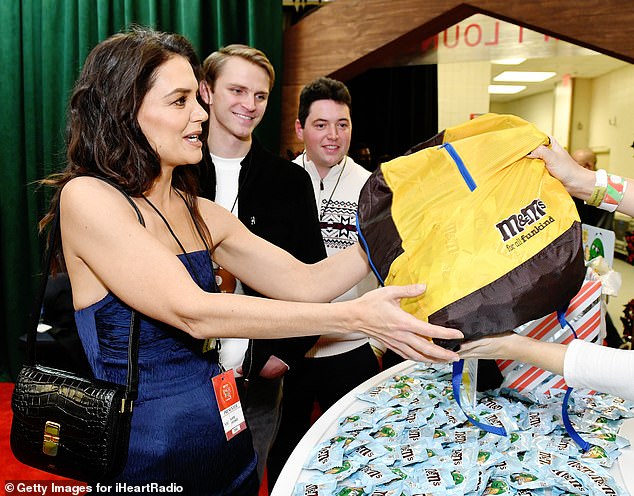 One user wrote: ‘This whole time I thought that photo of Katie Holmes going around a was from the early 2000s?’

‘Katie Holmes woke up and decided it was 2002,’ commented another user.

Another user added: ‘All morning I’ve been wondering why people are dunking on a photo of Katie Holmes from 1999 but apparently that’s not what this is?’

Others defended the actress for her nostalgic ensemble, adding that they too have fell victim to Y2K style.

‘I unfortunately cannot comment on the Katie Holmes dress top and jeans combo because I too lived through the early 00’s and made decisions I regret,’ wrote one user.

Katie wore the look – that featured a bustier dress with a bow – to celebrate the holiday season, while letting her brunette locks effortlessly flow to her side.

The star-studded music festival kicked off December 2 and has featured many performers such as Dua Lipa and Ava Max.

When Katie entered the venue, she was pictured picking up a few items from vendors, including a large M&M’s gift bag.

The actress was also seen wearing a black, crocodile-patterned purse over her shoulder. 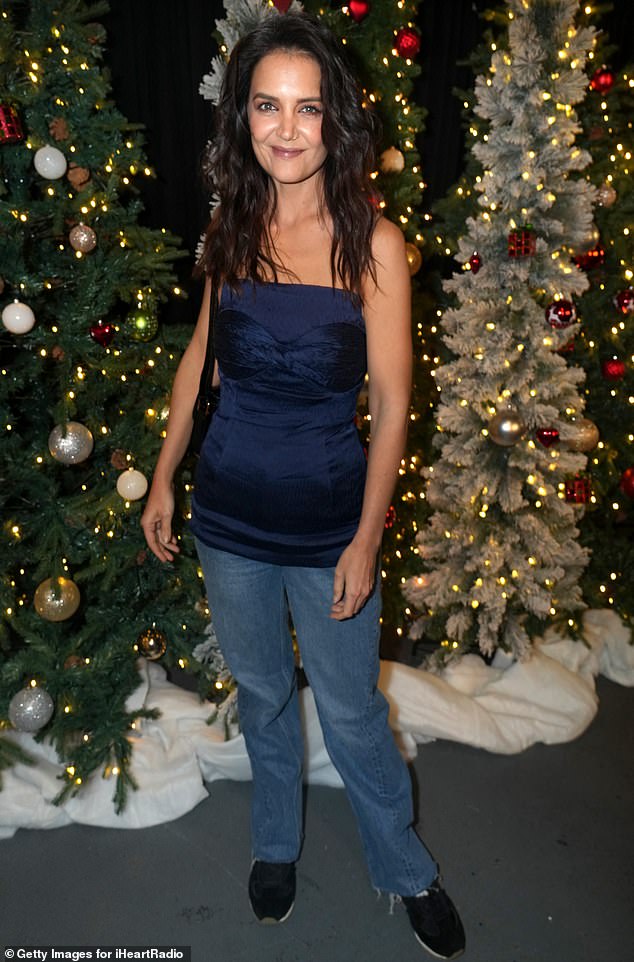 Is tofu high in fat? (compare tofu fat content to other foods)

Create Your Family Life Vision – Your Key to Family Connection

‘Hydrafacial is the Rolls Royce of facials’